We are living in a materialistic, commercial and money-orientated era and it’s hard not to get on the bandwagon of what it means to be successful, both financially and socially. We’re led to believe that success means having a ‘good’ career, a nice home and being a seasoned traveller. While all of these things are not intrinsically bad, and are actually good things to have and be; is money really the only catalyst for these supposed successes? Money is important and I’m not negating this but we often overlook other ways to create these opportunities in our lives.

Does money really make the world go round? Remember good old-fashioned bartering? The exchange of goods and services for someone else’s. Skills swaps are now becoming more prevalent as people realise the currency of exchange doesn’t have to be money. It’s all about who you know, the relationships you build over time that lead to these opportunities and realising the value and potential in something other than money.

I recently did a skill swap with a friend; massage treatments in exchange for Spanish lessons. While I realise I paid for the training in massage in the first place to be able to allow me to be in this position, it means that this skill can be exchanged not only for money, but for other skills too. What could be more valuable than that? It doesn’t have to be a mind-blowing skill either that you have to offer, sometimes just doing the odd handy job or cooking a meal may just be the very thing someone else needs. Helpfulpeeps website is just one way this can happen https://www.helpfulpeeps.com

I’ve been very lucky to travel to many countries over the years and it has definitely not been made possible by pots of gold, but because of the people I have had the pleasure of meeting over the years. Of course I needed money for plane tickets and the essentials but having the bestest of friends to visit in their home countries means you can stay with them and see the REAL culture of the country. 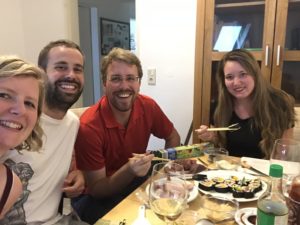 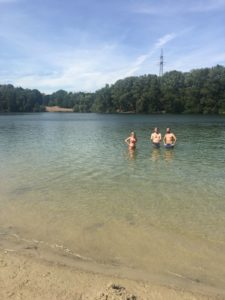 Invest your time in getting to really know people; be curious and make REAL friends. Not for the sole reason of getting something from someone, but just from pure curiosity and interest in someone and their life. It is a far cry from the traditional networking which can be a very detached business, but about making real solid connections that might even last a lifetime. You might be surprised what opportunities arise from that special friendship.

I recently visited my American friend of 10 years in Germany where she has just relocated, to be with her partner. As they didn’t live in the city, we did very few touristy things but found local restaurants, bakeries and even swam in a small lake. I got to see what ordinary German life is like with a visit to the local physio centre and the language school as my friend had few errands to run. I’m far more curious about what the GP surgeries are like over there and what people eat for breakfast than traipsing around somewhere that I could see on youtube. This is the stuff that doesn’t cost much money either.

I also met a girl on the plane who had also recently moved to Germany. She is British but her family is from Libya and she had a really interesting background. She told me it had been hard to make friends and I knew my American friend and her would get on because of their common interests so I linked her up. It never ceases to amaze me the opportunities we are given, if we only choose to take them up.

Good Neighbours shouldn’t be a thing of the past

We spend so much of our time nowadays making sure we can independently look after ourselves and our family unit. We have created an environment where each family unit has to physically own one of everything. Surely not every person in one street needs a lawn mower but that’s the norm. This not only means we need more money to sustain this level of independence but also means we’re creating a whole lot more stuff in the world. Yet, in the past we would have borrowed and shared garden tools with our neighbours (inter-dependence) or borrowed some sugar for that cake we were in the middle of making of rather than dashing out in the car to buy more.

I grew up with the neighbourhood culture but somewhere along the line it got forgotten. For the last 5 years I have been very lucky to have lovely neighbours either side of me and for which I’m so grateful. I have learnt a lot from how one particular relationship has emerged and what it means to be a good neighbour. It didn’t come naturally to me and I’m still learning, which may sound odd, but maybe these are unique relationships that perhaps we can rekindle. I have been invited into my neighbours’ homes and felt like part of their families when the children come round to play, I have been looked after when sick and brought an ice cream in hot weather. Phoebe, my cat, now has two extra mummies. To be invited into someone’s life in this way and know that you can call on someone can be such a comfort. Investing in these kinds of relationships brings so much more than might be anticipated.

Re-Root Yourself and invest in relationships of all shapes and sizes. It’ll make you and them feel great!

Author: rerootyo
Filed Under: Uncategorized
Mindshift Miracles- what a simple mindshift can help you achieve

Searching is in progress